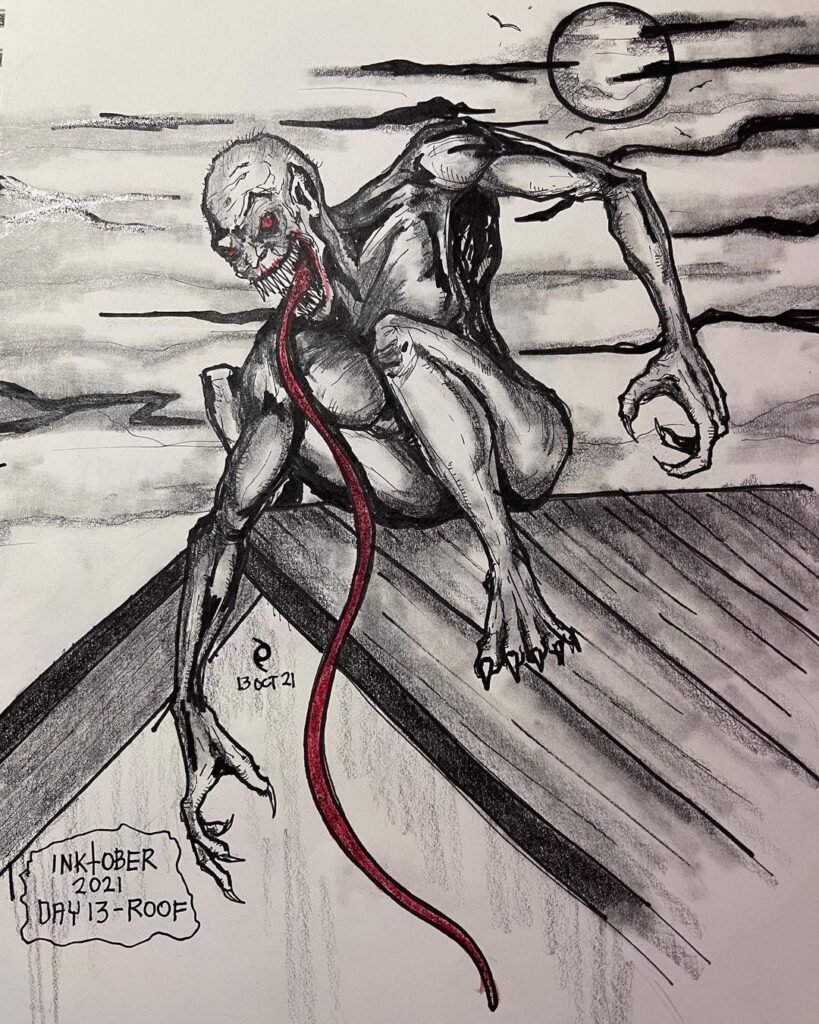 Inktober 2021 – Day 13 – Roof – is an image of an Aswang on a roof… There are beliefs that Aswangs stalks pregnant women from a roof then sucks out the fetus with the use of there needle like tongue… more on the aswangs below (source : wikipedia)

Origin of the Aswang

The Aswang was born out of Philippine folklore, with stories of this terrifying creature dating back to at least the 16th century, when Spanish explorers created the first written record of monster. The explorers noted that of all the monsters in their folklore, the Aswang was the most feared by native people. One of the most famous origins of the term aswang came from the aswang tradition in the Bicol region during the sixteenth century. The Bicolanos believed in the God named Gugurang, who was the good God that acted as the beneficent of their region, the defender and guardian of their homes, and their protector against the evil of the God Asuang. The God Asuang, however, was the evil God and rival, who attempted to always cause harm to Gugurang and found pleasure in doing so. Gugurang was always praised by the Bicolanos, and Asuang shunned and cursed.

However, in another story, Gugurang is portrayed as a fire-wielding God who, if displeased with the humans, would cause Mt. Mayon to erupt.  Aswang had no control over the people and became jealous of Gugurang’s power. As Aswang begged for Gugurang’s fire, Gugurang felt that Aswang was only trying to have fire to win the favor of the people, and the two began to argue for centuries. But Aswang was able to steal fire by turning himself invisible and hiding the fire in a coconut shell. However, Aswang was unable to control the power and caused the entire world to catch flames. Gugurang followed the flames which led him to Aswang and took the fire back. He called the Gods to help him put out the fire with rain and take revenge on Aswang by making thunder and lightning to strike the mountains. The act brought upon all the evils and destruction in the land, which the people had never forgotten Aswang for.

Aswangs commonly dwell at night in locations such as cemeteries and woods, as their powers are significantly, or sometimes totally, reduced during the daytime. However, despite being described as wild monsters that often live in the wilderness and outskirts of society, aswangs are also described as creatures that are capable of living within close proximity of or even within the confines of a village, leading to several reports of aswang attacks within large, populated towns and cities. Their ability to adapt and live within the urban and rural environments populated by humans while still maintaining their feral, monstrous nature is cited as a feature that distinguishes aswangs from most other monsters. Aswangs also generally have a fear of light. Wakes were often brightly lit to ensure that aswang would not come to the funeral to steal and devour the corpse. They also have a disdain for noise, but rare occasions describe aswangs attending noisy parties.

How to Defeat an Aswang

There are several remedies and countermeasures to drive away or slay aswang. The different countermeasures often vary depending on the cultural and symbolic significance of each tool. Holy objects, spices, salt, ash, the tail of a sting-ray, large crustaceans, vinegar, betel nut chew, and urine are all listed as tools for protection against aswang. The reversal of a ladder leading to the house was also said to be a countermeasure against aswang.

Because aswang were believed to be the cause of miscarriages, countermeasures to drive aswang away and prevent them from prowling during childbirth were developed. One method is for the husband of the child-bearing wife to remain under the house naked while furiously waving a sword. Sharp sticks or bolos should be inserted between the bamboos of the house floor to prevent aswangs from lurking under the house. Additionally, sick people should not stay in houses with holes and are told not to groan in order not to attract aswang.

There is also a special anti-aswang oil that can be developed. To make this oil, select a particular coconut and watch it grow. Pick it at twilight during a full moon when it is wet and gloomy; the breeze should also be chilly. The coconut should be grated and its juice must be squeezed out. Boil the mixture until it becomes oil. Recite secret prayers and throw all the waste into the ocean so that aswang cannot trace whoever made the oil. Once complete, the oil should be hung at the door of the house; it will boil when an aswang is near.

There are other methods of detecting aswang without the use of the special oil. Scratching noises heard from the ceiling of a house is often a sign of a nearby aswang. Aswangs in disguise can be detected by seeing if your reflection in the creature’s eye is inverted. Additionally, dogs, cats, and pigs with no tails are said to be aswangs in disguise. During holy masses, aswangs will also attempt to dodge the blessings.

To kill a witch aswang, a bolo knife can be used to strike the middle of the witch’s back; if that area is not struck, the witch can lick its wounds to heal its injuries. After slaying an aswang with a bolo, the bolo must be planted under the ground. Firearms are not advised for killing aswangs and it is useless to stab and slash at an aswang while it is in the form of an animal. Magic prayers can be used to make the aswang vulnerable; while it is in this helpless state, its body must be cut into pieces. If the aswang is cut into two pieces, each piece must be separated and taken to opposite river banks.